There are still cultural differences across Europe, but Autobahns and Autobahn etiquette do link them together.

If you're going to be driving in Europe, sooner or later, you'll probably end up on one of these motorways.

The name may be slightly different in each language…

But they link European countries together.

And the way Europeans drive on them is something they do have in common.

There is no need to feel intimidated about driving on the Autobahns, but American drivers especially need to know European driving etiquette.

Autobahn Etiquette - Which Lanes To Use 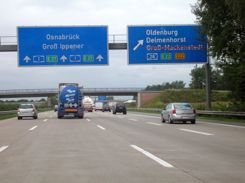 European drivers really do drive in the right lane or two, and only use the left lanes for passing.

(In the United Kingdom, of course, it's drive in the left lanes and pass on the right.)

American drivers have developed the bad habit of driving in any lane they want to, and it makes for more aggravation and congested freeways.

The "Fast Lanes" Are For Passing

We'll repeat that.... Europeans use the fast lanes to pass slower moving traffic only.

If you're driving on the Autobahns, observe Autobahn etiquette and do the same.

The traffic pattern looks a bit like a big game of leap-frog, but it's far more efficient and easier to deal with than having several lanes clogged up with slow drivers.

It's Illegal To Pass On The Right

...And European drivers don't.  If someone is coming up behind you...

Seriously... If you are anywhere outside of the slow lane, you really do need to keep an eye on your rearview mirror… some of those drivers do drive FAST.

They may not have been there a few seconds ago, but they'll close on you faster than you can imagine and expect you to move.

There ARE Speed Limits

Despite rumors to the contrary, there are speed limits posted on parts of the Autobahns in Germany.

In places where there are sharp curves or areas where heavy traffic is typical, posted limits may be between 50 mph (80 km/h) and 80 mph (130 km/h).

The rest of the Autobahn seems to be pretty much a free-for-all, with a suggested speed of 80 mph.

On heavily traveled parts of the Autobahns, you may see lighted speed signs over the roadway. If speed signs are lit above your lane, it means that speed limits are enforced.

The lights will flash the speed limit to remind you if you are exceeding the limit. It may even be different in each lane!

Even driving the Autobahn has its aggravations.  Part of that may come from reading road signs in a different language.

There may also be lots of road construction and not just in countries trying to come up to German standards.

You have to watch diversions and lane merging, but even when you run into this, it's less aggravating because of Autobahn etiquette. When lanes merge, cars from the two merging lanes take turns filing neatly into a single stack.

It seems like most Americans have become more selfish and territorial to the point of ignoring or even blocking drivers trying to merge when they are required to.

We think driving is a great way to get out of the cities and see a little of the European countryside. Learn a little Autobahn etiquette and the whole trip will be a more fun.