Like big cities everywhere, you'll find Krakow neighborhoods that were once towns in their own right.

Two that you might want to visit are Kazimierz and Nowa Huta.

Both can be most easily reached by tram from downtown.

(A little aside here... Krakow used to be spelled Cracow more often in English...

With all these other Polish names, I just can't write Cracow in its English form.)

Way back in the 14th century when it was established by the Polish King Kazimierz the Great, it was on an island in the Vistula River.

One branch of the river disappeared through the years, and as Krakow grew, the neighborhood found itself adjacent to the Old Town or Stare Miasto.

Today this Krakow neighborhood represents the old Jewish Quarter of the city.

There was a large Jewish community in Krakow up until World War II.

Some of the tragedy that took place here is chronicled in the movie "Schindler's List", parts of which were filmed here.

If you're a movie buff, you will recognize some of the scenes.

Schindler's factory can still be seen if you follow your map.

In keeping with its Jewish history, you can visit the Old Synagogue. It was built during the 15th century and renovated in the 1950s. It houses a branch of the Historical Museum with documents about the Jewish history in Krakow.

While you're in Kazimierz, you should also see the Remuh Synagogue and the old Jewish Cemetery next to it. This synagogue was built in the 16th century, and the cemetery has been in use since then.

In spite of damage in WW II, many headstones can still be seen from that era. Townhouses that also survived were used in "Schindler's List".

Walk Or Take A Tram 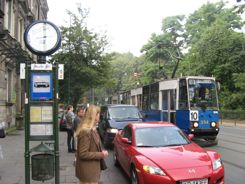 While Kazimierz may not be as well-preserved as the Stare Miasto, this neighborhood is going through a revitalization, and there are a number of sights to see and some nice restaurants.

Getting to the Kazimierz neighborhood is about a 20 minute walk from the center of Krakow, or you can take a tram.

Another Krakow neighborhood that has become a tourist attraction is Nowa Huta.

It's a bit further afield, so you should definitely catch a tram out to this one.

Nowa Huta means "New Steel Works". This large district was a model city built by the Communist authorities in the early 1950s.

This neighborhood is about five miles (8 km) from the Old Town.

A tram is one way to get to the suburb of Nowa Huta. You can also take a tour. Some tours are conducted in communist era vehicles like Trabants and Polski Fiats.

We love old airplanes, so we caught a tram out to the Polish Air Museum.  That's in another neighborhood to explore if you so desire.

You may just want to stay in Krakow's Stare Miasto, but if you want to see more of the city than that, these Krakow neighborhoods will show you a different twist on the history and a little more of the nitty gritty.