Krakow is one of the oldest cities in Poland, and as in all old cities, Krakow legends abound.

I love the legend that Krakow was built on the cave of a dragon...

...or the Dragon of Wawel Hill.

There are many versions, but simply put...

The dragon was supposedly slain by a boy who became King Krak, the city's legendary founder.

It's a colorful story in any version.... 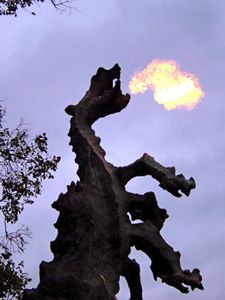 None of the old King's Knights could get the dragon...

Arak took on the challenge.

He stuffed a lamb with sulphur and hot spices and left it out for the dragon.

The dragon ate it...

...and drank so much water from the Vistula River that he exploded....

You've got to get a giggle out of that.... exploding dragons!

This metal sculpture of a dragon is outside of a cave called the Dragon's Den at the foot of Wawel Hill.

This dragon actually breaths fire when someone texts him on their mobile phone as you can see... much to the delight of tourists.

The cave was a tavern in medieval times, but now it's just a cave.

You can tour it if you want, but you'll have to use your imagination for dragons on the inside.

There Are Dragons All Over Krakow

On the top of Wawel Hill is where you'll find the Castle and Cathedral of the same name.

The hill towers over a bend in the Vistula River on one side (convenient for the dragon to drink from), and the city on the other.

The Wawel Cathedral also features a statue of the dragon, and you'll see little green dragons at all of the souvenir stands.  We bought one to hang on our Christmas tree... a great travel memory! 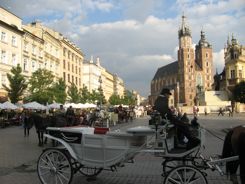 You'll spend a lot of time in the main market square.

It was the biggest square in medieval Europe, and it seems to be where everyone hangs out today.  The square is filled with flower stalls and outdoor cafes.

It's surrounded by beautiful buildings that house antique stores, boutiques and restaurants.

St. Mary's Church overlooks the main square.... and here we find another of the Krakow legends....

There are two towers on St. Mary's Church.

The lower one is actually the church tower.... the taller one is the city watchtower.  From this higher tower, you'll hear a bugle played on the hour.

The story goes that during a Tartar invasion, a watchman in the tower saw the enemy approaching and sounded the alarm. Before he could finish the tune, an arrow pierced his throat.

It was decreed that a bugle call, the "hejnal", should be played each day in memory of the old watchman hero.

You Hear The Bugle Call Today

The bugle call you hear today is played by real buglers, and the tune they play is unfinished. (These buglers are firemen, and they are proud of their role. They serve as fire lookouts, but also serve as musicians.)

The hejnal of Krakow is a Krakow legend that has continued almost without interruption for seven hundred years.

There are also Krakow legends...

One about a sorcerer named Lajkonik...

...another about a Polish Robinhood named Janosik,

...and one about enchanted knights turned to pigeons.

Those are too long for the telling here, but when you're in Krakow, wander by and see the fire breathing Smok statue, maybe play tourist and explore the Dragon's Den cave under Wawel Hill.

Stop in one of Krakow's sidewalk cafes, listen for the hejnal, and enjoy those Krakow legends.