Sure To Keep Beer Lovers Happy

If you like beer, then Belgian beers should draw you to visit this little country.

The Visit Belgium website says there are over 450 different varieties of beer.

Beer is more than just a drink here...

Many of the beers have specific beer glasses in which that beer...

and only that beer, may be served.

Just like some wine glasses, each glass is made to enhance the flavor of the beer it is designed for.

Certain beers may be paired with food, just like wines are...

And some beers are aged for years in their bottle...

Beers Are Aged In The Bottle

Don't expect to go in and get a draft beer.  Almost all Belgian beers are "conditioned" in the bottle not in kegs...

So it will be different than if you go into a British pub to get a local beer on tap or if you visit one of the growing number of micro-breweries in the U.S.

Expect your fine beer in a bottle.

Many Are Made In Small Quantities

Many of Belgium's beers are made in small quantities and don't travel well, so you'll just have to go to Belgium to try them.

But you know, that's true of many local beers.  Even some that are exported are just not the same as what you get in the country of origin.

Many Different Styles... and Some Are Strong

Other different types include...

There are Trappist beers which make famous dark ales and great blond beers. Abbey Beers which are similar but are not made in monasteries.

Six of Belgium's Trappist monasteries make beer. There are some twenty different beers brewed by those six monasteries.

These breweries are not open to the public except on occasional "open door days" and then only with reservations, but you can sample them in local cafes and some abbey shops.

If you drive around to the Trappist monasteries to try their beer, you can try some cheeses too... Beer and cheese instead of wine and cheese. 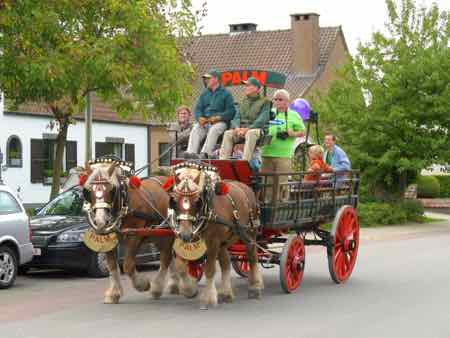 Many of the breweries have tours or museums. Some require reservations, some have admission frees for the tours and tastings and some are free. Check with the Visit Belgium website for more information.

As you might expect with all these beer, there are beer festivals in many cities and towns the year round.

In addition to trying a variety of beers, you can buy beer glasses, bottles, labels, and coasters (though you can snag coasters for free when you buy your beer). You can also buy old ads, clocks, mirrors, pints, jugs and other collector's items.

Not up for that kind of a festival? You'll find a number of Belgian beer museums, and there are also many Belgian beer tours.

Don't worry too much about all the differences; just revel in the fact that when you stop in a little cafe or pub, you'll have lots of great Belgian beers to choose from.